Kashi Vishvanath Temple is one of the most famous Hindu temples and is dedicated to Lord Shiva. It is located in Varanasi, Uttar Pradesh, India, the holiest existing place of Hindus. The temple stands on the western bank of the holy river Ganga, and is one of the twelve Jyotirlingas, the holiest of Shiva temples. The main deity is known by the name Vishvanatha or Vishveshvara meaning Ruler of The Universe. The Varanasi city is also called Kashi, and hence the temple is popularly called Kashi Vishvanath Temple.

The Temple has been referred to in Hindu Scriptures for a very long time and as a central part of worship in the Shaiva philosophy. It has been destroyed and re-constructed a number of times in the history. The last structure was demolished by Aurangzeb, who constructed the Gyanvapi Mosque on its site.[1] The current structure was built on an adjacent site by the Maratha monarch, Ahilya Bai Holkar of Indore in 1780.[2]

Since 1983, the temple has been managed by the government of Uttar Pradesh. During the religious occasion of Shivratri, Kashi Naresh (King of Kashi) is the chief officiating priest and no other person or priest is allowed to enter the temple sanctorum. It is only after he performs his religious functions that others are allowed to enter. [3] As per Hindu mythology, Lord Shiva married Goddess Parvati on Mahashivratri and gauna (a ritual associated with consummation of marriage) was performed on Rangbhari Ekadashi. Residents of Kashi – the abode of Lord Vishwanath—celebrate the occasion in a grand style.

Standing on the western bank of India’s holiest river, the Ganges, Varanasi is one of the oldest surviving cities of the world[citation needed] and the cultural capital of India. Inside the Kashi Vishvanath Temple is the Jyotirlinga of Shiva, Vishveshvara or Vishvanath. The Vishveshvara Jyotirlinga has a very special and unique significance in the spiritual history of India. Tradition has it that the merits earned by the darshan of other jyotirlinga scattered in various parts of India accrue to a devotee by a single visit to Kashi Vishwanath Temple. Deeply and intimately implanted in the Hindu mind, the Kashi Vishwanath Temple has been a living embodiment of India’s timeless cultural traditions and highest spiritual values. The Kashi Vishwanath Temple attracts visitors not only from India but abroad as well.

As per Shiva Purana, once Brahma (the Hindu God of creation) and Vishnu (the Hindu God of Harmony) had an argument in terms of supremacy of creation.[4] To test them, Shiva pierced the three worlds as a huge endless pillar of light, the jyotirlinga. Vishnu and Brahma split their ways to downwards and upwards respectively to find the end of the light in either directions. Brahma lied that he found out the end, while Vishnu conceded his defeat. Shiva appeared as a second pillar of light and cursed Brahma that he would have no place in ceremonies while Vishnu would be worshiped till the end of eternity. The jyotirlinga is the supreme partless reality, out of which Shiva partly appears. The jyothirlinga shrines, thus are places where Shiva appeared as a fiery column of light.[5][6] There are 64 forms of Shiva, not to be confused with Jyotirlingas. Each of the twelve jyothirlinga sites take the name of the presiding deity – each considered different manifestation of Shiva.[7] At all these sites, the primary image is lingam representing the beginningless and endless Stambha pillar, symbolizing the infinite nature of Shiva.[7][8][9] The twelve jyothirlinga are Somnath in Gujarat, Mallikarjuna at Srisailam in Andhra Pradesh, Mahakaleswar at Ujjain in Madhya Pradesh, Omkareshwar in Madhya Pradesh, Kedarnath in Himalayas, Bhimashankar in Maharashtra, Viswanath at Varanasi in Uttar Pradesh, Triambakeshwar in Maharashtra, Vaidyanath Jyotirlinga, Deogarh in Deoghar, Jharkhand, Nageswar at Dwarka in Gujarat, Rameshwar at Rameswaram in Tamil Nadu and Grishneshwar at Aurangabad in Maharashtra.[4][10]

The Manikarnika Ghat on the banks of Ganges near to the Kashi Vishwanath Temple is considered as a Shakti Peetha, a revered place of worship for the Shaktism sect. The mythology of Daksha Yaga, a Shaivite literature is considered as an important literature which is the story about the origin of Shakti Peethas.[11] It is said that Shiva came to the Kashi Vishwanath Shrine through Manikarnika after the death of Sati Devi.[12][13] 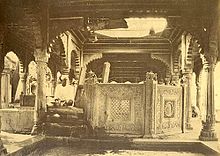 The temple complex consists of a series of smaller shrines, located in a small lane called the Vishwanatha Galli, near the river. The linga of the main deity at the shrine is 60 cm tall and 90 cm in circumference housed in a silver altar.[14] The main temple is quadrangle and is surrounded by shrines of other gods. There are small temples for Kaalbhairav, Dhandapani, Avimukteshwara, Vishnu, Vinayaka, Sanishwara, Virupaksha and Virupaksh Gauri in the complex. There is a small well in the temple called the Jnana Vapi also spelled as Gyaan vapi (the wisdom well). The Jnana Vapi well sites to the north of the main temple and it is believed that the Jytorlinga was hidden in the well to protect it at the time of invasion. It is said that the main priest of the temple jumped in the well with the Shiv Ling in order to protect the Jyotirlinga from invaders.

According to the structure of the temple, there is a sabha gurh or congregation hall leading to the inner garbha, gurh or sanctum. The venerable linga is made up of black colored stone, and is enshrined in the sanctum, placed on a silver platform. Structure of the temple is composed of three parts. The first compromises a spire on the temple of Lord Vishwanath or Mahadeva. The second is gold dome and the third is the gold spire atop the Vishwanath carrying a flag and a trident.

The Kashi Vishwanath temple[15] receives around 3,000 visitors every day. On certain occasions the numbers reach 1,000,000 and more. Noteworthy about the temple is 15.5 metre high gold spire and gold dome. There are three domes each made up of pure gold. Thus, this Hindu temple is also called The Golden Temple[citation needed], because of little bit being identical to the Golden Temple.

Importance of the temple

The temple is widely recognized as one of the most important places of worship in Hindu religion and most of the leading Hindu saints, including Adi Sankaracharya, Ramakrishna Paramhansa, Swami Vivekananda, Goswami Tulsidas, Swami Dayananda Saraswati and Gurunanak have visited the site.[16] A visit to the temple and a bath in the river Ganges is one of many methods believed to lead one on a path to Moksha (liberation). Thus, Hindus from all over the world try to visit the place at least once in their lifetime. There is also a tradition that one should give up at least one desire after a pilgrimage the temple, and the pilgrimage would also include a visit to the temple at Rameswaram in Tamil Nadu in Southern India, where people take water samples of the Ganges to perform prayer at the temple and bring back sand from near that temple. Due to the immense popularity and holiness of Kashi Vishwanath temple, hundreds of temples across India have been built in the same architectural style. Many legends record that the true devotee achieves freedom from death and saṃsāra by the worship of Shiva, Shiva’s devotees on death being directly taken to his abode on Mount Kailash by his messengers and not to Yama. The superiority of Shiva and his victory over his own nature—Shiva is himself identified with death—is also stated. There is a popular belief that Shiva himself blows the mantra of salvation into the ears of people who die naturally at the Vishwanath temple.

A Shiva temple has been mentioned in the Puranas including the Kashi Khanda (section) of Skanda Purana. The original Vishwanath temple was destroyed by the army of Qutb-ud-din Aibak in 1194 CE, when he defeated the Raja of Kannauj as a commander of Mohammad Ghori. The temple was rebuilt by a Gujarati merchant during the reign of Delhi’s Sultan Iltutmish (1211-1266 CE). It was demolished again during the rule of either Hussain Shah Sharqi (1447-1458) or Sikandar Lodhi (1489-1517). Raja Man Singh built the temple during Mughal emperor Akbar‘s rule, but orthodox Hindus boycotted it as he had let the Mughals marry within his family. Raja Todar Mal further re-built the temple with Akbar’s funding at its original site in 1585.[17]

In 1669 CE, Emperor Aurangzeb destroyed the temple and built the Gyanvapi Mosque in its place.[18] The remains of the erstwhile temple can be seen in the foundation, the columns and at the rear part of the mosque.[19]

In 1742, the Maratha ruler Malhar Rao Holkar made a plan to demolish the mosque and reconstruct Vishweshwar temple at the site. However, his plan did not materialize, partially due to intervention by the Nawabs of Lucknow, who controlled the territory.[21]:2 Around 1750, the Maharaja of Jaipur commissioned a survey of the land around the site, with the objective of purchasing land to rebuild the Kashi Vishwanath temple.[21]:85 However, his plan to rebuild the temple did not materialize either. In 1780, Malhar Rao’s daughter-in-law Ahilyabai Holkar constructed the present temple adjacent to the mosque. In 1828, Baija Bai, widow of the Maratha ruler Daulat Rao Scindhia of Gwalior State, built a low-roofed colonnade with over 40 pillars in the Gyan Vapi precinct.[22] During 1833-1840 CE, the boundary of Gyanvapi Well, the ghats and other nearby temples were constructed. Many noble families from various ancestral kingdoms of India and their prior establishments make generous contributions for the operations of the temple. In 1841, the Bhosales of Nagpur donated silver to the temple. In 1859, Maharaja Ranjit Singh donated gold for plating the temple’s dome.[23][21]:200

The temple was managed by a hereditary group of pandas or mahants. After the death of Mahant Devi Dutt, a dispute arose among his successors. In 1900, his brother-in-law Pandit Visheshwar Dayal Tewari filed a lawsuit, which resulted in him being declared the head priest.[24]

There are 5 aartis of Shree Kashi Vishwanath:

Security arrangements do not allow any cell phones, camera, belts with metal buckle, cigerrette, lighters, etc. inside the temple.